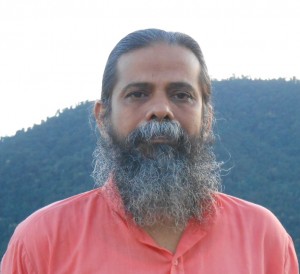 The word ‘kriya’ is a Sanskrit word derived from the Sanskrit root ‘kri’, this means ‘to act’, ‘to do’. So ‘kriya’ means ‘action’ or ‘activity’. When we talk about ‘Kriya Yoga’ we are not talking about each and every activity we are doing in this mundane world. We talk about those activities that establish us in the state of Yoga. The meaning of Yoga is Samadhi, yuj samadhau. In other words Yoga is union, yujir yoge; this means union with our own source or the union of individual self with the Cosmic Self known as the God. Since this happens in Samadhi, Yoga is same as Samadhi. So the actions or activities we carry out to reach the state of Samadhi are called as Kriya Yoga.

When I met my master for purpose of learning Kriya Yoga, I questioned him, ‘What is Kriya Yoga?’, and he counter questioned me what ‘kriya’ is. After my answer he said that why do we use the word ‘kriya’ when someone dies in our family. My answer was, “This is the ‘last rite’ performed by the family for the deceased and we say that we are holding kriya”. This means ‘Kriya’ is the last rite, and here lies the clue to understand Kriya Yoga. But actually this is only a last rite for this human birth of the deceased person, and is not the last rite for the individual soul. When that happens we could say that the actual last rite has been performed. The practice of Kriya Yoga finally leads us to the last rite of our ‘ego self’ and we get established in our ‘true self’.

After the death of the body the soul of the deceased again takes birth with a new body according to the ‘karma’ or activities performed in preceding life. We give Samadhi to the dead body after the death. We have three types of Samadhi for the body, viz., bhu samadhi, i.e., burial of the body under the ground, jala samadhi, i.e., immersion of the dead body in river or in other water bodies, and agni samadhi, i.e., burning the body on a funeral pyre. So one of these three samadhis is last rite of a body, and then certain religious rituals are performed for the departed soul; we call them together as ‘kriya’. But this is not kriya or last rite for the individual soul, the soul now remains with the subtle body, suksma sharira. Only the gross body, sthula sharira is dismantled and ingredients of the gross body mix with their sources which are the five gross elements ether, air, fire, water and earth. Again the subtle body takes a new birth after enjoying or suffering in different worlds according to the activities performed in this life.The main components of the subtle body are mind, intellect, ego and subconscious known together as citta or mind-stuff.The imprints of all our activities either physical or psychic are stored in citta and accordingly we get a new birth.This cycle goes on. Then why should we have a problem with this? Because this is suffering and we want to get rid of it, we want bliss,we want liberation and to join with our own source.

Our mind stuff is illumined and carries out activities by the power of the Self. But irony is that the mind forgets its true nature and identifies itself with the body-mind complex and that is known as ‘ego’. So ego is the product of ignorance. However this ego is explained as, “the seemingly identification between ‘the Power of Seer’ or ‘Visionary Purusha’ (true self) with ‘the power of seeing’ or ‘vision intellect’ is I Sense” (Yoga Sutras: 2-6). The Power of Seer is same as the Seer; this is the Absolute Awareness, the Pure Consciousness or the Self. The power of seeing is the cognitive principle; this is intellect, in other terminology this is called citta, and this is the reflection of the Consciousness. A sense object is contacted through sense organs by the mind and the intellect determines the nature of the object and impression thereof is stored in the sub-conscious. The intellect is not the Knower, and it is only the final cognitive principle. The Consciousness beyond these psychic principles, viz., mind, intellect, and subconscious is the Knower. Now due to appearance of similarity between the Consciousness and the intellect due to non-discrimination gives rise to ego or ‘I Sense’. This is wrong identification of the true self with body-mind complex and is called ‘ignorance’.

We possess various desires and work accordingly, reap the result, and we either enjoy pleasure or pain as a result. All these have imprints in our mind stuff so the cycle goes on; again we take birth and die again. . All these are sufferings and to get rid of those sufferings we need to eradicate our ignorance so that ego gets discarded. Then only we can say that as the last rite, this means in the last rite we are established in our ‘true self’ and this has been called as ‘Self Realization’. Thus the purpose of Kriya Yoga is Self Realization, and for that we need Samadhi. Hence Rishi Patanjali describes the purpose of Kriya Yoga as, “(Kriya Yoga is practiced for the purpose of) attaining Samadhi and reducing the afflictions” (Yoga Sutras: 2-2). The afflictions or sufferings are described as Ignorance, I Sense, Cravings, Aversions and Inherent Involvement. By practice of Samadhi we annihilate those. Due to ignorance we have ‘I Sense’ or ego, and then that gives rise to desires, viz., ‘I want this or like this’ (cravings) and ‘I do not want this or do not like this’ (aversions). These are the causes of anger, greed, sex, infatuation, fear, anxiety, frustration, depression and other such negative states. All our sufferings again remain as impressions in our subconscious and are raised up to the surface of our mind as desires and hence an unending cycle of sufferings. Moreover there is inherent involvement (abhinivesha); this is the characteristic with which one is born. This is described as, “that which spring naturally even among the learned ones like an ignorant is called inherent involvement” (Yoga Sutras: 2-9). It is the fear of death; even after knowing the Principle of Self intellectually the learned ones still have the fear of death like an ignorant. This spontaneous anxiety is afflictive in nature. This is a result of identification of body with the Self and the fear of death arises from the threat of loss of that identity though the Self is ever immortal. This comes from the experience of deaths in past lives. So the cause of inherent involvement is the long possession of ‘I sense’ or ego over many births. By practice of Kriya-yoga one gets rid of these afflictions and is established in Samadhi.

Yoga and Samadhi are of same meaning. This is cessation of all activities of the mind-stuff, yogaschittavrittinirodhah (Yoga Sutras: 1-2). Our mind merges with prana, the life-force. Hence Rishi Patanjali has given a breath practice to merge the activities of mind, “by extended exhalation and holding the breath in a special way” (Yoga Sutras: 1-34). To bind the mind-stuff we need this practice. This is a must before the practicing of three types of meditation, viz., dharana, dhyana and Samadhi. That is the first Kriya in Kriya Yoga. The practice of concentration or dharana begins with this breath practice leading finally to the state of Samadhi. The Self Realization (Knowledge or liberation) can be achieved by this Kriya practice (breath practice or pranayama) thereby disjoining the course of exhalation and inhalation. This practice or Kriya leads to vayu samadhi, merging the mind with the air, i.e., breath. When bhu samadhi, jala samadhi and agni samadhi are related to the physical body, vayu samadhi is related to the subtle body or mind-stuff. Then advancing with further concentration one experiences akasha samadhi, mind roams in the space now; even the breath is now feeble and the practitioner experiences the internal sounds since sound is the quality of space. We can call this as nada samadhi. The scriptures describe nada yoga, yoga of sound. The ‘Aum Technique’ of Kriya Yoga when practiced without any effort due to effect the breath practices, either Hamsa Sadhana or Kriya Proper, the practitioner enters into nada samadhi or akasha samadhi. Finally the practitioner due to long and uninterrupted practice of Kriya enters into shunya samadhi, the Samadhi of void. Here even the subtle manifestations of sound does not exist, thoughts have gone much before. Even the state that ‘I am meditating’ does not exist. So Rishi Patanjali says, svarupashunyameva samadhih, when in meditation practitioner’s own form appears like a void is called Samadhi (Yoga Sutras: 3-3); here the practitioner goes to a state of forgetting the individual identity. The practitioner, the act of practicing and the practiced are one. This is a non-dualistic state of consciousness. In this state of consciousness the practitioner realizes the ultimate reality that there exists only One Consciousness and that is total, uninterrupted and without beginning or end. The ‘ego being’ falls down. Elevating a human being to this state is the purpose of Kriya-Yoga.