Kriya Yoga : The Science Of Life-Force

The breath-based meditation Kriya-yoga is a familiar name after its reintroduction by Mahavatara Babaji to Lahiri Mahasaya and subsequent work of Paramahamsa Yogananda in the western world. Though many literatures are available the lack of clear exposition on the philosophy and practices of this ancient spiritual science is still felt. The book, Kriya-yoga: The Science of Life-force, authored by Rajahamsa Swami Nityananda Giri tries to fulfil this want. 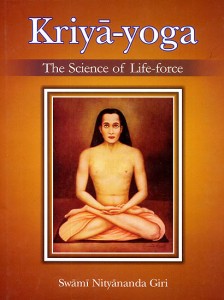 This work by Rajahamsa Swami Nityananda Giri vividly explains the Knowledge of Life-force known as Pranavidya, which forms the basis of Kriya-yoga citing from Vedas, Upanishads, Srimad Bhagavadgita, Yogasutras of Patanjali and many other ancient scriptures, and analyzes how the breath technique quiets the mind, brings equanimity and results in development of discriminating intelligence that answers the questions and purpose of human life. This also gives an understanding on our inner reading, the principles and practices form auspicious resolves, noble faith, self-effort and austerities from righteousness, yama and observances, niyama, up to the transcendental state, samadhi, those form the appendages of this treatise, and describes how the breath-based practices and meditations described herein are necessary for a seeker to remain healthy and attain the Knowledge.
The body principle, sarira tattva, is also anatomized using both biological and spiritual sciences to accelerate spiritual practice and to facilitate the understanding on life and death, gross to casual bodies, five sheaths, five vital breaths, three knots, seven energy centers and their working. The most important aspect for readers and seekers is that for the first time they will find the secret techniques of Kriya-yoga, viz., Nabhi Kriya, Khecari mudra, Guru Pranama, Hamsa, prana viksana, Mahamudra, Isvarapranidhana Kriya, Thokar Kriya, Jyoti mudra, Sambhavi mudra, and different techniques of meditation, e.g., Aum, twelve-lettered Vasudeva mantra, inner-matrka and outer-matrka meditations, etc. are revealed, and explained in detail by Rajahamsa Swami Nityananda Giri citing their illustrations in Upanishads and ancient yogic scriptures and enumerating the rationale and scientific approach behind such practices and benefits involved.
~*~*~

The book has been published by Munshiram Manoharlal Publishers in 2013 and is available in hardcover. It could also be purchased at leading on-line shops some of which are listed below: